​“Style, sympathy, and technical aplomb . . . it's doubtful that the Cavatina's sophisticated and artistic playing could be surpassed.”   — Fanfare

The Cavatina Duo – Eugenia Moliner, flutes (Spain) and Denis Azabagic, guitar (Bosnia)—has become one of the most impressive combinations of its kind in the world.

Dedicated soloists and chamber musicians, the Cavatina Duo breaks convention with their combination of instruments. Add to that their daring choices of varied and versatile repertoire, and the result is new sounds, colors and musical phrasings, which in return awakens a high level of emotion and audience response. A Cavatina Duo concert is a musical experience you don’t want to miss.

Radio and television stations in Europe and North America such as WFMT and NPR have broadcast the duo’s performances. They have been the subjects of interviews in international magazines such as Chamber Music America, Ritmo (Spain) TodoFlauta (Spain), FluteTalk (USA), Classical Guitar (UK), Guitarra Magazine (web), Soundboard (USA) and Flute—the British Flute Society Magazine. They are the first guitar and flute duo to be featured on the covers of Classical Guitar Magazine (UK), FluteTalk (USA) and Ritmo (Spain).

Cavatina Duo has performed with orchestras and string quartets in Europe, USA, India, South Korea and Mexico including the Chicago Sinfonietta, Traverse Symphony, Sarajevo Philharmonic, Daejeon Philharmonic and the Youth Orchestra of Monterrey, Mexico. In 2010 Cavatina Duo gave the world premier of another work commissioned by them from Alan Thomas, “Concerto for Flute, Guitar and Orchestra,” with the Camerata Serbica at the Guitar Art Festival in Belgrade.

Eugenia Moliner has been acclaimed as “brilliant” by the British Flute Society magazine. She has performed with principal musicians from the Chicago Symphony, Rotterdam Philharmonic and Toronto Symphony orchestras as well as with many chamber ensembles, including the Chicago Chamber Musicians, Civitas Ensemble, the Aspen trio and Chinese Fine Arts Musicians. Her discography includes eight CDs.

A prizewinner in twenty-four international competitions, Denis Azabagic has been described as a “virtuoso with flawless technique” by Soundboard Magazine. He has appeared as soloist with orchestras such as the Chicago and Madrid Symphonies, among many others. Azabagic has collaborated with the Chicago Chamber Musicians, the Civitas Ensemble and the Cuarteto Casals. His discography includes twelve CDs, two DVDs and a manual. 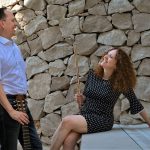 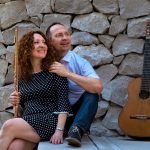 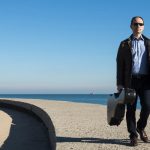 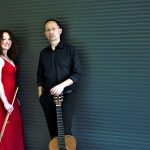 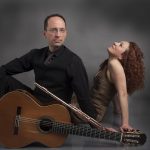 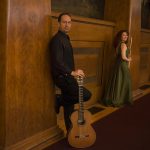