Christine Walevska has been center stage in the cello world ever since her first international concert appearances at the age of eighteen. Those early triumphs inspired the sort of accolades normally reserved for star performers of mature years. Typical of the tributes was the comment by the Los Angeles music critic Patterson Greene: “She parallels on the cello the singular persuasiveness of Fritz Kreisler on the violin.”

Her first teacher was her father, a dealer in rare violins and cellos.  It was he who set her on the path at the early age of 13 to be the first private student with the famous Gregor Piatigorsky.

That was only the beginning. When she was sixteen she won a French government scholarship to study with the great Maurice Marechal at the Paris Conservatoire. Two years later she became the first American ever to win first prize there in cello and in chamber music.

Her rise was meteoric, beginning her career in Germany where in her second season she played 45 concerts in that country alone. Following a series of International triumphs, including heralded appearances at Buenos Aires’ famed Theatro Colon, where she performed a Recital, the Brahms double concerto with Henryk Szeryng and the Dvorak cello concerto in the same week to rave notices, there soon followed a round of appearances that sounded like a roll-call of the great European cities.

Over four decades of concertizing across the globe she has played with orchestras throughout Germany, the United States, France, in every corner of Spain, Poland, Mexico, Central and South America,(where she has brought music to every big city or small, wherever there is a concert hall with an orchestra or piano to accompany her) in Holland with the Rotterdam Philharmonic, the Hague, in the Concertgebouw, the Stockholm Philharmonic, the Israel Philharmonic, Vienna, Italy, Prague, Cuba, the Los Angeles Philharmonic, Dresdener Philharmonic, concerts in Japan, Honk Kong, China and Taiwan.

In 2015 the Museum of Chimei in Taiwan, with a generous grant, sponsored her latest recording recorded in Montreal. This CD may be purchased through this website. The five CD boxed set titled ” The Walevska’s Legendary Recordings” which now exist on the Decca label, has all seventeen cello concertos, which were originally produced by Phillips. This set can also be purchased through this website.

Her playing was greatly admired by Jascha Heifetz and Arthur Grumiaux.

Arthur Rubinstein said of her. “… Christine Walevska has the most sensuous tone I have ever heard on the cello… She is the only cellist, who takes my breath away…”

Claudio Arrau, yet another from the ranks of great pianists, said: “… Christine Walevska is the world’s greatest cellist..”

Many composers have dedicated works to her, including Aram Kachaturian, Ferde Grofe (title: “Christine”), Jose Bragato and Ennio Bolognini, who wanted her to be the only cellist to continue to play his compositions.

The violinist, Josef Suk, Dvorak’s great grandson, wrote to her and stated that her interpretation of Dvorak’s cello concerto was the greatest he had ever heard. He invented her to play it at the Prague Spring Festival and she has played since with the Suk Chamber Orchestra in the concerts: “Jewels of the Prague Castle.”

The recording she made with the London Philharmonic of the Dvorak concerto was celebrated in a book by Prof. Fabio Uccelli: El Commiato de Anton Dvorak, (Dvorak’s Farewell), published in Florence. Entirely devoted to analyzing this work in depth. The book analyzes phrase by phrase her interpretation with that of Rostropovitch. Because of this book, during the Dvorak anniversary year, 2004. She had a wave of invitations to play the concerto everywhere from Beijing to Brazil. She played to the concerto three times with the Maggio Musicale Fiorentino. The book is dedicated to Christine Walevska as: “the world’s greatest interpreter of Dvorak’s cello concerto.” 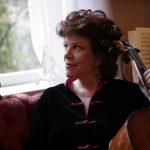 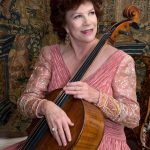 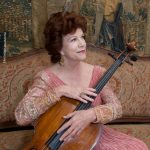 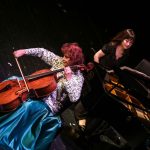 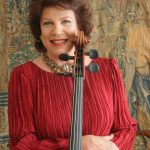