Winners of both the First Prize and Amadeus Prize at the Wigmore Hall International String Quartet Competition, Formosa Quartet is “one of the very best quartets of their generation” (David Soyer, cellist, Guarneri Quartet). Hailed as “spellbinding” (The Strad) and “remarkably fine” (Gramophone), the Formosa Quartet has given critically acclaimed performances at the Library of Congress, the Da Camera Society of Los Angeles, the Chicago Cultural Center, the Walter Reade Theater at Lincoln Center, the National Concert Hall in Taipei, Wigmore Hall in London, die Glocke Bremen, and the Kammermusiksaal at the Berliner Philharmonie. Based in Chicago and Los Angeles, the ensemble is deeply committed to exploring new mediums for string quartet, while retaining its founders’ mission of championing Taiwanese music and promoting the arts in Taiwan.

The Formosa Quartet undertakes a variety of residencies at organizations and institutions across North America and Asia. In 2013, the Quartet founded the annual Formosa Chamber Music Festival, which represents one of its primary missions: to bring high-level chamber music training to talented young musicians in Taiwan, while simultaneously offering first-rate music to Taiwanese audiences of all ages. Formosa is also the faculty quartet-in-residence at NYO Canada, holds week-long performance and teaching residencies at Eastern Michigan University and the University of California, Los Angeles, and has enjoyed residencies with Art of Élan, Rice University, and University of California, San Diego.

The members of Formosa Quartet – Jasmine Lin, Wayne Lee, Che-Yen Chen, and Deborah Pae – have established themselves as leading solo, chamber, and orchestral musicians. With degrees from the Juilliard School, Curtis Institute of Music, and New England Conservatory, they have performed in major venues throughout the United States, Asia, and Europe, and have been top prizewinners in prestigious competitions such as the Paganini, Primrose, Fischoff, Naumburg, and Tertis competitions. As chamber musicians, they have appeared regularly at the Marlboro, Kingston, Santa Fe, and Ravinia festivals, as well as at the Chamber Music Society of Lincoln Center, La Jolla Summerfest, and the Seattle Chamber Music Society. The members of the Formosa Quartet are currently on faculty at Eastern Michigan University, the University of Illinois at Urbana-Champaign, Roosevelt University, and the University of California, Los Angeles. They have previously held principal positions in the San Diego and Cincinnati Symphonies as well as faculty positions at the University of Southern California, Taos School of Music, McGill University, and the Juilliard School.

Formed in 2002 when the four Taiwanese-descended founders came together for a concert tour of Taiwan, the Formosa Quartet’s cultural identity has since expanded to include  broader American and pan-Asian roots. Their name “Formosa” is still a tribute to the culture of Taiwan, but is also largely taken in its most basic sense: Portuguese for “beautiful.” 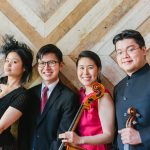 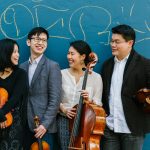 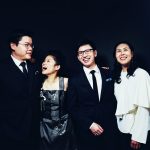 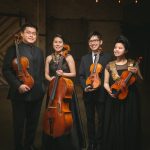 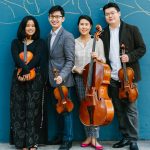 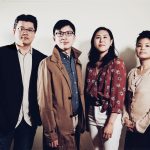